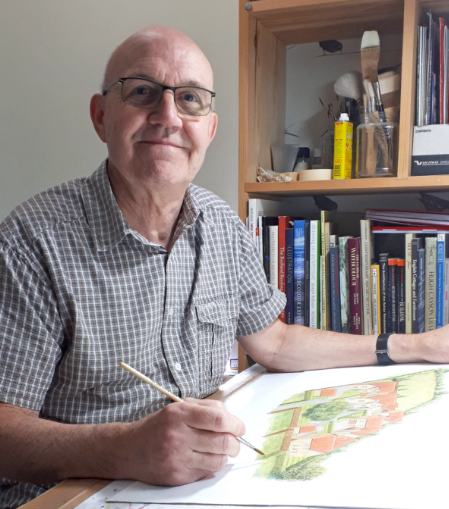 He has been creating fine art watercolours and commissioned illustrations for over 30 years. He gained an MPhil from the Royal College of Art in Information Illustration in 1997 and has been practicing as a freelance architectural illustrator alongside teaching posts since 1984. He was awarded the prestigious Matt Bruce Memorial Award in 2014 at the annual exhibition of the Royal Institute of Painters in Water Colours’ (RI).

Peter runs occasional workshops in architectural drawing and watercolour rendering. He is a Fellow of the Society of Architectural Illustrators (SAI) for which he served two years as President. His watercolours have been exhibited at venues throughout the UK including the Mall Galleries and Bankside Gallery in London and Southampton City Art Gallery and The Concourse Gallery at Solent University in Southampton. He also has work in private collections in the UK and abroad. Peter’s book, Architectural Illustration, was commissioned by The Crowood Press and published in 2018.

Inspired by topographical drawings and watercolours of the 18th and 19th centuries my work is objective and realistic and true to the Italian term, veduta esatta meaning ‘exact view’. In his book The Elements of Drawing John Ruskin talks about the importance of the process of drawing in education and William Morris said “everyone ought to be taught to draw…”. My interests are concerned with the continuance and promotion of this ideal through my own practice.

When it comes to architectural illustration, Peter wrote the book! 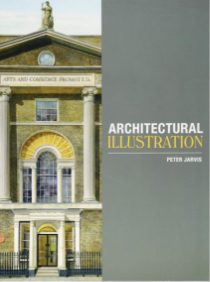 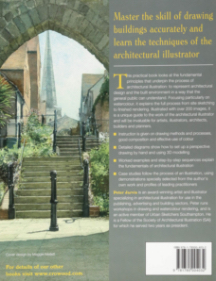 This practical book looks at the fundamental principles that underpin the process of architectural illustration: to represent architectural design and the built environment in a way that the general public can understand. Focusing particularly on watercolour, it explains the full process from site sketching to finished rendering. Illustrated with over 200 colour images, it is a unique guide to the work of the architectural illustrator and will be invaluable for artists, illustrators, architects, builders and planners.

You can buy this book from The Crowood Press or Amazon.

Fine art print workshop, dedicated to the production and promotion of original prints.

Established in 1982 for the benefit of graduates and associates of the RCA.

The Society of Architectural Illustrators

Brings together the world’s leading progressive, professionals who bring architecture to life.

Fellow of the Society of Architectural Illustrators